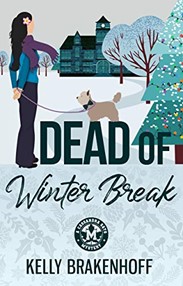 And Cassandra is knee deep in . . .
Suspects.
Her boss is dead, and the police are calling it
burglary gone wrong. But when the killer comes after her, it’s going to take
more than a pair of furry boots to keep the smart, witty Morton College
administrator, Cassandra Sato, out of the deep. . .
Snow.
Her first Christmas in Nebraska could be her
last unless her friends help unravel the mystery and housebreak her dog.
Buy now for a fast-paced, holiday themed
whodunit.

Other Books In The Series:

Towering waves are headed
her way.

When a monster tsunami targets Oahu, Hawai’i, a
college administrator must evacuate 1,000 students.

Before the first wave hits.

If you like ordinary heroines faced with
unexpected adventures, then you’ll love the prequel short story to the popular
Cassandra Sato Mystery Series.

Goodbye Hawai’i, hello dream job . . . in Nebraska??
Ambitious Cassandra Sato traded her
life in Hawai’i for a dream position at Morton College in rural Nebraska. She
expected the Midwestern church casseroles, land-locked cornfields, and
face-freezing winters would be her biggest challenges, but it’s her job
that’s rapidly becoming a nightmare.

A deaf student is dead and the investigation
reveals a complicated trail of connections between campus food service, a local
farmer’s beef, and the science lab’s cancer research. Dealing with
homesickness, vandalism, and a stalker, Cassandra is trapped in a
public relations disaster that could cost her job, or more. No one
said college was easy.

VP of Student Affairs Cassandra Sato has a desk full of problems
and it’s not even Thanksgiving break.

A student’s injury and a
deaf advocacy project brings national media attention to underfunded Morton
College. Cassandra’s new boss talks to her dead husband. Cassandra’s
mentor thinks he’s a superhero in a senior citizen’s body. And Cassandra,
recently moved from Hawai’i, can’t crack the code of what to wear during
November in Nebraska.

If you like academic cozy mysteries with
funny BFFs, hilarious student shenanigans, and small-town drama, you’ll like
this series. Get Dead Week now!