Growing up, I saw a lot of my Auntie Mavis and Uncle Pat. They lived in the Welsh border town of Oswestry, and we lived in the big city of Manchester. Mavis is my mother’s sister and always lived close to her parents, so as children, we made the seventy-plus mile journey regularly to visit them.

Mavis and Mum were nothing alike in looks, you wouldn’t believe they were sisters at first glance but once you got to know them; the resemblance was clear with their characters and actions. They were always close as sisters, and Mavis and Pat would come on holiday with us or we would go with them.

As they got older, Mavis and Mum grew more alike in looks and when Mum was in her sixties and seventies, they was definitely no mistaking them for sisters!

One story about Auntie Mavis has always stayed with me, and when I mentioned it, she doesn’t remember. I was probably under ten, and at her house sitting on the couch watching her ironing clothes. I don’t know how we got onto the subject of honeymoons, but she told me they were for making babies.

I was horrified, but not for the obvious reason. It didn’t occur to me how babies were made, my immature mind hadn’t got that far. No, I was far more terrified of sleeping in the same bed as a strange man!

This thought kept me awake for a long time until eventually, I realised that he wouldn’t be strange, and I wouldn’t always be that child!

In 2012, Auntie Mavis and Uncle Pat came to the wedding of my daughter. It had been two years since my beloved Mum had passed away. Apart from being so conscious of her not being there to celebrate the day, Mavis walked in and she was so like Mum it brought tears to my eyes.

These days, I love being around her because she makes me feel close to Mum. Unfortunately with COVID being around; we haven’t seen them for six months.

Everyone has a favorite aunt, and even though I was lucky enough to have had four, Mavis has been a constant in my life and the one I have felt the closest to.

Not to mention she wrote a book, and reading about her growing up with Mum, makes me love her all the more!

Do you have a favorite aunt?

Mavis and Mum in the fifties with their brother, David. 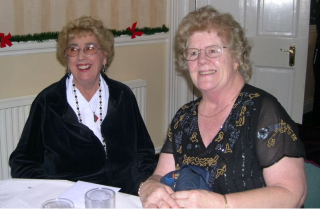 For many years Mavis would tell me about how she was typing up her memoirs. She literally meant typing as she worked away on an old typewriter. As a foster parent, I knew she’d had an interesting life, but I had no idea until it was eventually turned into a book.

Mum and Mavis were very close and spent a lot of time talking on the phone and the stories Mavis told Mum would pass to me to me, only I would only get a shortened version.

I remember hearing about a cat that went missing only to turn up three months later. I also recall a story about two little girls and how Mavis had problems with their parents turning up unexpectedly. I remember being told how she had won Mum in a Million and went to Buckingham Palace. All of these stories were brought to life when I heard the full version in the book, and it was fascinating to hear of her trip to see the Queen.

You can read these stories and more in Mavis’s book and her early life growing up in the forties and fifties. I was charmed by stories of her ‘big sister’ and I even get mentioned.

“Thoroughly enjoyed this interesting and insightful memoir of the life and times of a hard working foster carer and her family. I was one of the children in her care and whilst I was aware of many of the stories, I learnt a few new things too! It’s easy to read and would appeal to many. I laughed out loud and shed a tear, well worth a read.”

Read more about the book and see my review here.