Adam, a young alcoholic, slowly descends into madness while dealing with the psychological scars of childhood trauma which are reawakened when his son and wife die in a car accident that he feels he is responsible for. After a failed suicide attempt, and more group meetings that he can mention. Adam hears a rumor of a Haunted Island off the Coast of Maine, where “if someone wants it bad enough” they could be reunited with a lost loved one.

In his desperate attempt to connect with the ghost of his four-and-a half year old son, he decides to go there, to Dagger Island, desperate to apologize to, or be condemned by, his young son. Adam is not sure what he deserves or even which of these he wants more.

While staying in a crumbling old boarding house, he becomes involved with a beautiful and manipulative ghost who has spent 60 years tormenting the now elderly man who was her lover, and ultimately her murderer. The three of them create a “Menage-a-Guilt” as they all come to terms with what it is that ties them so emotionally to their memories and their very “existence”.

Beautiful, Frightening, and Silent is a poetic fever dream of grief, love, and the terrifying ways that obsession can change who we are.

She walks slowly to his bed, leaving a trail of wet footprints in her stead. She is a ghost ship, silently making its way across the sea of his room. She looks at his sleeping form, he is curled in on himself. When he was younger and stronger, he would sleep like a warrior. He was so proud. He would dominate everything, his bed, his dreams, even sleep itself would bow down under his perceived strength.

He is so much older now. These days he sleeps like a child, or a cat, both starving but petrified of the mouse.

She hears the rattling of death, climbing out from the deepest parts of his lungs each time he exhales. It was the little things like these moments, she supposed, that she grew to love. They were her favorite part of all of this. Her favorite part of this very long endless day.

She climbs into his bed and into his world. She lies next to him; her body is damp and seemingly heavy. Her wet hair and wet face, and waterlogged body creep into his dreams. She is a memory revitalized, a nightmarish creature, a visitor come back to stay.

She stares at him, intently, she is focused. You would think, after 60 years she would grow tired of his face, of this, her nightly ritual, but she hasn’t, and she expects she never will. She stares until she feels something building in her throat, it’s her anger, it’s her fear, it’s her rage. It feels like fire, it burns inside her, aching to get out.

He opens his eyes, with the confusion of age, alcohol and

too many dreams. Before thinking better of it, his arm reaches across the bed. It reaches for her memory. He finds the other side of the bed empty, but damp. She doesn’t let him touch her, not for many years. In the morning, his sheets will smell like the ocean, at least her side of the bed will. It will have the aching scent of brine, salt, and wet. It is so different from the way his side smells, which is of tears, whiskey, and the sour sweat of fear.

He gets up, ignores the wet foot prints she leaves on the floor, the ones that lead to his bed, the ones that circle him while he sleeps. He plods to the bathroom, washes his face, rinses the staleness out of his mouth, he thinks for a moment he sees her out of the corner of his eye. She will always look the same, with her soaked hair, white dress, her head down, no, she doesn’t let him look at her face, not directly. His breath catches in his throat; he makes a sound, somewhere between a cough and a scream.

He should be used to this by now, used to her. The simple fact she can still surprise him like this is what keeps all of this from becoming commonplace. He thinks he picks up on the sound of her laugh, the way it would ring like silver in his ears, but he is mistaken.

No, that’s not quite right.

She tries to remember the time before she felt those things. this task of hers is more difficult than one would expect, the simplicity of trying to remember when she existed before they met, before she wandered into his life. This a burden she has not yet managed to bear.

Was there a time before they collided and destroyed each other’s worlds?

She never hated him while she was alive, she should have, she knows that he deserved it. He deserved her hate.

She does hate him now. She knows is both a beginning and an ending.

Hate can be powerful, but not as powerful as fear.

She fears him now.

She feared him then.

There are ghosts and memories in this house that even she fears. This man, he only fears her. It is what keeps her here.

She opens her mouth, and she invites the rage that burns in her throat to finally have a voice and it feels like fire, waiting to be born. She feels it rushing out of her. It is a scream that has taken 60 years to finally be birthed.

She opens her mouth, and all that’s there is saltwater. 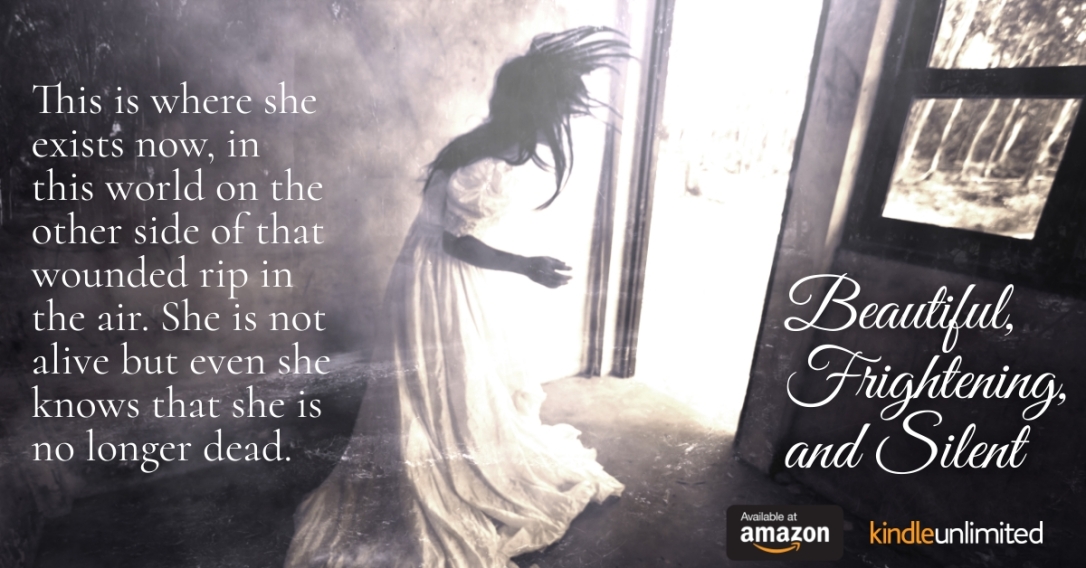 – Jennifer Anne Gordon is an award-winning ballroom dancer, performer, and choreographer, she studied acting at the New Hampshire Institute of Art, as well as English and Art History at University of New Hampshire. Past jobs have included professional actress, a magician’s assistant, a gallery director, an artist, a burlesque performer, as well as a horror novelist.

Her first novel, “Beautiful, Frightening, and Silent” was published by Breaking Rules Publishing in late winter 2019. Her second novel “From Daylight to Madness” will be published during summer of 2020.
When Jennifer is not busy writing or performing, she is an avid traveler who loves to photograph abandoned and forgotten places.
Her mixed media artwork showcases her love of the late Victorian and Edwardian Era, as well as her passionate love for showgirls, burlesque, and vaudeville. Her work is in private collections throughout the world, and has been showcased in calendars, perfume labels, and has been featured in Somerset Studio Magazine, as well as Mixed Media Art

Magazine. Victoriana is the first published collection of Jennifer’s artwork.