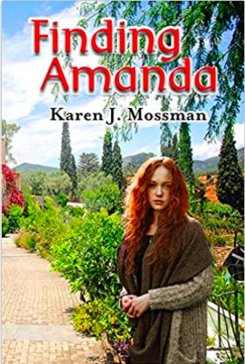 After a series of family arguments Mandy walked out and disappeared. For her family, it was devastating. Changing her name to Amanda and moving to a different part of the country, she begins a new life working in a hotel.

One evening a programme about missing people comes on the television. Her face fills the TV screen. Everything Mandy had tried to forget returns with new clarity. Will she have the courage to face the past and realise the misunderstanding was caused by her family’s unique situation?

Finding Amanda is a story of courage and hope and a bond that never breaks.

Many years ago I was watching a television programme called ‘Missing’. It told the story of people who had disappeared. It was fasincating. Why would they go missing, what drove them to it?
Findining Amanda is a story about a girl, who, having survived a tradegy that killed her parents, found life as the only girl in a family of boys too difficult. Eventually, after another family argument, she leaves. She walks out of the family home and never goes back.
Mandy is sitting in front of the television with her boyfriend, reading. Suddenly he gasps and when she looks up, a picture of herself fills the TV screen.
‘This is Mandy who has been missing for eight years. Her brothers are desperate to find her.’
Suddenly, Amanda’s secret was out. Can she put the past to behind her and be reunited with her family?
Finding Amanda is a story of courage, hope and a bond that never breaks. That night, she woke in a cold sweat. Jamie tried to rouse her. Again, she ignored him until he went away. She was dreaming she was lost on the moors alone. She could hear her brothers calling her and couldn’t find them, whichever way she turned. Her mum was in the clouds trying to guide her, but she just couldn’t get there.

Getting up, Amanda went into the kitchen for a glass of water. She took it to the lounge window and stared out into the darkness. Somewhere an owl called and the full moon illuminated the gardens.

Suddenly she felt a stirring inside… Aaron. As twins, they used to know what the other was thinking and felt linked. She long since learnt to blot him out, especially when she lived on the streets.

The sensation of him flooded through her and now she had let him in, she somehow knew he was awake too.

For the first time in a long time, she called his name from somewhere deep inside. His voice was clear in her head. He was looking at the night sky too and she had the strongest urge to pick up the phone. She turned to look at it. Go on; go on, she heard him say.