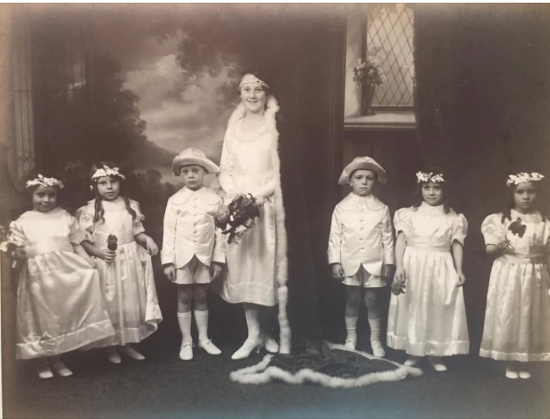 I love old photos and came across this one. It was taken in 1928 and the Rose Queen in the centre is my Auntie Molly.

She was an incredible and interesting character.

The daughter of a local councillor, she was born in 1914. She defied her religious family and married an atheist. None of them attended the wedding as a result.

She was married for 60 years. They took two weeks holiday every year and walked the length and breadth of the UK. They never owned a car.

They never had a colour TV until the 90s and didn’t have a landline phone until early 2000.

Her settee and dining table were the ones she had as wedding presents. Her curtains she changed twice a year, from summer ones to winter ones she’d made in the 60s.

She always wore a pinny with a hanky in the pocket or up her sleeve and made most of her own clothes.

When her husband died she continued to live independently until her death in 2014 aged 100.

2 thoughts on “An Amazing Woman”