A LOVE AFFAIR WITH A BEAUTIFUL OLD BUILDING…

The Reluctant Hotelkeeper
by


#KINDLEDEAL
ON SALE FOR 99C/99P FROM
JANUARY 16 – JANUARY 20, 2019
A rescue mission originally thought of as lasting for a year or two turned into a 35 year lifetime love affair with a beautiful old building.
There were to be battles royal with neighbours not wanting their status quo to be altered, and with the local fire authority who sought to impose draconian new safety measures.
John Searancke came to the role of hotelkeeper almost accidentally, and most definitely with much reluctance. After his parents’ marriage fell apart, he was dragooned in, at the age of 22, to pick up the pieces of their new venture, a barely-trading country house hotel that had, frankly, seen better days. Not only was it posting an annual loss, but the fabric of the building was crumbling and there was no money left to make improvements.
Over the years, and with the steepest of learning curves, the grand old building was renovated and transformed to meet the requirements of the modern discerning traveller. Accolades for the hotel and its restaurant were won; together they became a well-regarded destination for a number of celebrities – and those that deemed themselves to be celebrities but were not. Stories abound featuring idiosyncratic guests, overbearing public bodies, fractured family life and animals of all shapes and sizes. The local fire station next door was demolished one foggy night, people were frightened by flying dogs and snakes in the long grass, and there were, as befits a country house, strange goings on in the night. Many were the guests who checked in who really should not have been seen together.
This is a tribute to all the people behind the scenes who helped to make the hard-won transformation into a great success.
Join The Authors Mailing List Here, Click here!

A Short Excerpt
Meanwhile, for my part, I recalled the tale of how one morning, on the way to the new kitchen, and walking through what remained of the old original hotel kitchen, I thought that I had been transported into another lifetime, a cross between Dante’s Inferno and a Victorian Christmas. I had stopped dead in my tracks.

There at the far end of the room was an unrecognisable person covered almost entirely in feathers. Any feathers not attached to that person were swilling around the room like a cloud, all but obscuring the far doorway, before landing softly to form a light covering on the floor tiles, much as I imagine the interior of a duvet to be.

On closer inspection, the mystery person turned out to be my mother! What had got into her mind I do not know, but she had, unbeknownst to anyone else, decided that her contribution to that particular Christmas was going to be the plucking of all of the pheasants that had just been delivered. Swooping on the box of birds and snatching them away from the hapless potboy, she maneuvered herself into a spare space, which happened to be adjacent to the top of a chest freezer. Clearly, tidiness was not going to be her watchword during this process. Feathers were pulled out, legs and heads were chopped off with gay abandon, and finally, the right hand was plunged into the bloody interior, emerging clutching a large handful of intestines, slimy heaps of which adorned the top of the freezer. Cleaning up after her was a bit of a trial, but I was glad that she had made the effort. I suppose that she could identify that with long bygone times and tasks that she had undertaken all those years ago.Find It On Amazon
United States: https://www.amazon.com/dp/B07LB7WLZM/
United Kingdom: https://www.amazon.co.uk/dp/B07LB7WLZM/
Smart Link:
smarturl.it/TheRelHotelkeeper
In Paperback
smarturl.it/HotelkeeperPB

We hope to see you here for some fun, some giveaways and some visiting authors.
CLICK HERE, GO TO THE AUTHOR EVENT

Check out this awesome line up of guest authors!
Guest Author’s Schedule 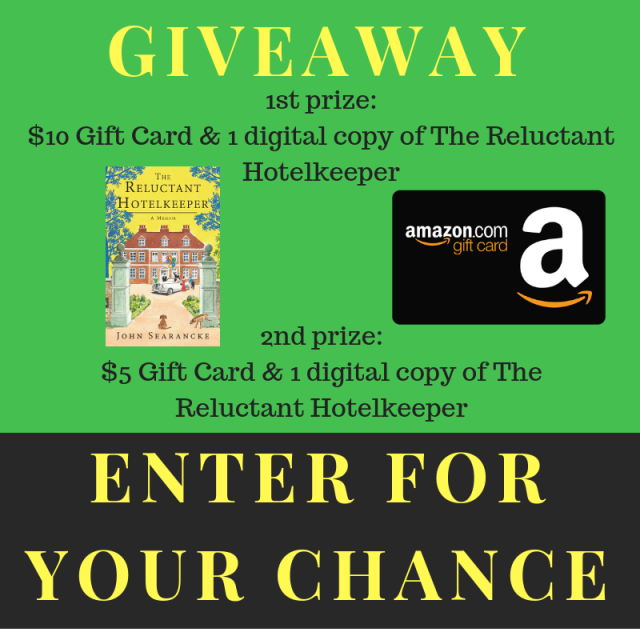 John Searancke is restaurant reviewer for the Tenerife newspaper Island Connections. Born in 1943 at Derby Royal Infirmary, a war baby, he lived his early life in Ashby-de la-Zouch and was sent away to be educated at Kings Mead Preparatory School, Seaford and afterwards at Rugby School. Later commissioned into the Territorial Army, he has been variously a director of a light engineering company, an hotel and restaurant owner, director and chairman of a marketing consortium, and latterly a partner with his wife in a commercial legal services company. He has enjoyed working in England and Switzerland and has homes in England and northern Tenerife, where he now lives with his wife Sally.
Learn more about John from his exclusive author interview, Click here!
Find & Follow him online
Website / Facebook / Twitter / BookBub / Amazon / Goodreads

This blog is brought to you by Rukia Publishing Book Promotions.

Our Mission:
Bringing authors and readers together to promote self published, Indie Authors!
www.rukiapublishing.com

Leave a Reply to Margaret A Daly Cancel reply