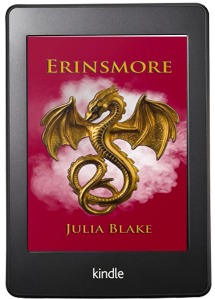 All her life, Ruby has longed to escape. Her imagination fed by the Narnia books and Arthurian legends, she dreams of another world.

Discovering the ancient prophecy stone in a Cornish antique shop, she and her cynical older sister, Cassie, suddenly find themselves in the mythical land of Erinsmore. A realm of swords, chivalry and magic, it is everything Ruby has been longing for, but, is a world poised on the brink of war…

The evil warlock Lorcan has escaped his prison, bringing death and destruction to Erinsmore and its people with the release of his hounds of death, the skraelings, and the Gilmesh, creatures of pure evil who extract the souls of their victims.

Struggling to understand this strange world, Ruby and Cassie have to toughen up quick, if they wish to survive and help their new-found friends in the oncoming battle. For if Erinsmore falls to Lorcan, then their own world will be next. And what exactly does the last verse of that prophecy mean…

When this was first published I did some promotion for it and featured it here on Karen’s Book Buzz Blog. I felt I knew it well and it’s only when I actually read it, I see I didn’t!

I didn’t have the feel for the story and it’s only by reading a book, the characters come alive. Probably very much like you reading this. It’s very hard to describe something wonderful, but I’m going to try!

Generally, I like crime novels, romance, and realistic books based in the modern day. I’m probably one of the few who has never seen Lord of the Rings, for instance.  Fantasy and science fiction doesn’t draw me. When I found myself between books and saw this complimentary copy, I thought it time to read it. I did not expect to enjoy it as much as I did.

Julia Blake’s imagination knows no bounds – it really doesn’t. Suddenly, I’m a fan of magic, who’d have guessed! The most fascinating thing is at the beginning the author said: ‘Erinsmore popped into my head almost fully formed.’  All I can say is, Wow! To have something like that come into your head is amazing.

As for the story, it has everything, dragons, magic, spells, flying beasts and lots of adventure. I liked how the two sisters were from today’s world and went back through a portal to a time gone by. How our modern language is interpreted by people from a bygone age is also interes and to see the two worlds collide was entertaining.

Having said that, if I’d have read what I’d just written before reading the book, it would have put me off, after all I’m not a fantasy fan, am I? This book blew me away, I loved it! The sisters captured my imagination as I saw the world through their eyes.

The story line was stunning, and why this book is not a bestseller I don’t know.

Buy a copy, read it and review it. There are only three reviews on Amazon UK – four when I add mine. There should be hundreds and if readers knew about it, then there would. So please share this post and let’s get everyone reading Erinsmore – the world needs to know about it!