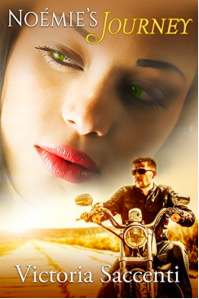 Love is waiting around the next curve…but trouble is never far behind.

Desperate to shake memories that stalk him like feral beasts, Richard Winters points his motorcycle toward the highway and twists the throttle—destination anywhere but New York. By the time he puts his kickstand down, he’s in Summitville, North Carolina, where, with a few annoying exceptions, one being an outlaw MC, he’s left alone.

Except there’s one woman who catches his notice and resurrects the protective instinct that cost him everything once before. A woman with stunning green eyes that haunt his dreams, and facing prejudice that makes him want to rise to her defense. But that would mean doing the last thing he wants to do—lower his guard.

Noémie Bellerose has heard times are changing, but in 1968 North Carolina, she and her younger brother are second-class citizens. The new bartender in town is temptation on two wheels, but in what world could the two of them connect? Not this one.

Despite their best intentions to avoid trouble, trouble finds them both—and so does an attraction that won’t be denied. But can love bloom where it is planted, or will they be forced to resort to desperate measures…before hate cuts them down?

This book was recently featured on here under Find Your Next Read. I adored the cover  and when I read the description, I knew I had to read it as well. I was lucky enough to request and receive an ARC (Advanced Readers Copy).

Immediately the story gripped me and realised two things very quickly. One left me wondering why I thought Victoria Saccenti wrote twee romances! The second was how she is a born story-teller.  As it progressed, I knew I’d found a new favourite author.

The setting in sixties saw a courtesy and politeness we don’t see so much any more. I also loved the references to the fashion and everything from the sixties era.

Richard Winters was a great manly hero, he had his own troubles and took off for a new life. He hadn’t expected to find Noémie or to fall in love. She was fragile, yet strong, feisty, yet frightened.  She needed someone behind her to give her confidence in herself and Richard was that man.

It’s a gritty story dealing with racism, domestic abusive, and alcoholism. All extremely well handled by the author. The suspense builds throughout the book: the female tormentor, will she get her just deserts? Her vicious boyfriend, what will he do next? Noémie’s alcoholic father, would he attack her again, and the sexual tension between her and Richard. Everything was dealt with satisfactory, the reader was given everything their desired and needed to get fulfilment from story!

I really did enjoy it as I got lost in the pages of a world set in the deep south and a million miles from mine. From the descriptions of the area, to the heat, and the wonderful characterisation right until the end, made this story complete.

There only two things that I struggled with was Noémie’s name, and the length of the chapters. I’m one of those people who likes to read to the end of the chapter before taking a break, They seemed exceptionally long at times and I had to leave them mid chapter. The other thing was Noémie’s name. I like to call the main character the way the author intended, not make up my own version. Sometimes I was refering to her as Naomi, other times, Noi-me.

My rating for this book has to be five plus stars, heck! Twenty five stars – a fabulous enjoyable read!