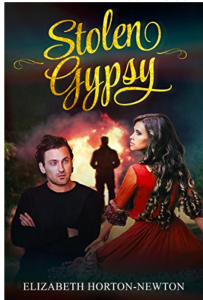 Her parents are dead. The government has failed her. Now she doesn’t even know who she is. Terza Blackstone is rescued by handsome Irishman Tristan Devlin and that begins the search for her true identity. When everything you thought was yours has been stolen from you, there’s only one thing to do. Steal it all back. What do gypsies, the Witness Protection Program, a drug cartel, and a young girl running for her life have in common?”

I have read several books by Elizabeth Horton-Newton and know this multi-genre writer is very talented.

These are the reviews for her other books

I love thrillers and crime stories with a bit of romance in them and this one did not disappoint. It’s all of that and a whole lot more.

Told in the first person by Terza as the main character, I liked how it occasionally switched to third person as the story was told from a different point of view and in a different chapter so it wasn’t confusing.

Terza is a teenager and when her parents are killed in a car accident, she finds out they were not her real parents, and they were criminals wanted by the FBI. She is to be taken into protective custody as whoever killed her parents were out to get her too. Being a headstrong teenager, Terza doesn’t want to be taken in and goes on the run. That’s when she is fortunate to meet Tristan, who helps her.

Here begins a story full of twists I didn’t see coming. Lots of really good secondary characters who play major parts in the story. I particularly liked Peter McCray the detective. I think because I was seeing him through Terza’s eyes, I felt he was a lot older than he really was. He had a good little back story too.

I had guessed about Terza’s age but it felt like a long time before the author revealed it. She didn’t actually say how old Tristan was and it turned out she was not as old as I thought she might end up being. A clever little twist on the story.

I don’t want to say too much and spoil it for you should you decided to read it – and I do highly recommend it. Especially if you love police stuff, a bit of crime, a bit mystery and a whole lot of thriller.

If you have already read this book. I would love to hear your comments and thoughts about it. 1. When and how did the story first come to you?

I have no idea where the idea came from. It was one of those things where one thought led to another.

2. It’s a fairly big book, so how long did it take you to write? From Chapter One to publication?

I actually started the book before I wrote my third book. I put it aside because I wasn’t sure about the end. In fact, I still have a hard time. Different beta readers didn’t help as they totally disagreed on the end!

3. Who designed the book cover and how did you pick the characters on the cover to represent Terza and Tristan?

The book cover was designed by my go to designer, Rachel Bostwick. As to the characters on the cover, Terza was easy. But we had a tough time with Tristan! In the end Rachel came up with the man on the cover. Intense and a tad menacing.

4. How much research did you do on Gypsies, or was this something your already knew about?

I knew a little about gypsies. That was a challenge as well. “Gypsies” don’t like the term. They prefer to be called Rom or Romani. I debated that for a long while. Finally I decided to go with the term gypsy. There’s a tv show called My Big Gypsy Wedding. It seemed a bit more PC based on that. I learned a great deal about the Rom when I lived in NY. There was a lot more detail in the original book but I left some out in the end. This book was a lot more challenging to write than my other books. It incorporated so many characters and their unique experiences I was worried Terza would get lost in the mix. And I took liberties with Rom customs. A real Rom family would never be isolated from a group or family. They carry a lot of customs from their past that would have taken too long to add to the book and did little to enhance the story.

Sometimes endings can be difficult especially when you aren’t sure which way to go and opinions differ. It was strange having two ending in the book and I’ve never come across an alternative one. I almost didn’t read the second version as I just accepted the first, and it was fine. The second one I didn’t feel was necessary as the outcome was still the same.