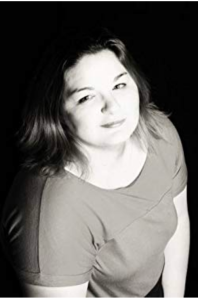 USA Today bestselling author Em Taylor writes Regency Romance and has dabbled in the contemporary and paranormal subgenres of romance too. But she can’t resist the lure of the ballrooms of Mayfair and the country houses of the aristocracy in the early 19th Century for long.
Born and raised in the central belt of Scotland, Em has tried her hand at nursing, retail and teaching Religious Education. It wasn’t until she found she enjoyed writing Star Trek Voyager fan fiction that she decided to try writing her own characters. She still indulges her love of film and TV by crewing at conventions around the UK. She also enjoys playing the recorder, reading, walking and hopes one day to finish a knitting project with all the wool she has stashed in her house.
Em is author of  ten books and we’ll look at one of them.
Saved By a Rake
Restoring Lady Anna
Saved by a Rake/ Restoring Lady Anna (together)
The St Nicholas Day Wager
Lady Harriet’s Unusual Reward
A Desperate Wager
A Love Remembered
Sleeping Lord Beattie – The Contrary Fairy Tales
The Cinder Earl’s Christmas Deception – The Contrary Fairy Tales–
Lord Rose-Reid and the Lost Lady – The Contrary Fairy Tales 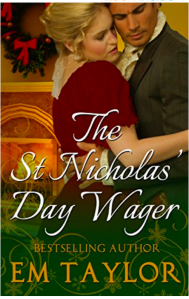 As the clock in White’s hallway chimes midnight on St Nicholas’ Day morning, Lord Nicholas, Viscount Eastden makes a stupid wager. Somewhat foxed, he agrees to a wager which states that he can marry the spinster sister of the Earl of Thornwich by Christmas eve.  If Thornwich wins the wager and Eastden fails in his quest to marry her, he will get ten thousand pounds and vice versa.
Having grown up on neighbouring estates, Nicholas can’t figure out why a nice girl like Gabriella failed for so many seasons on the marriage mart. Gabriella appreciates the viscount’s honesty when he explains the wager. Knowing the dire straits of her family’s finances and her brother’s addiction to gambling, it seems that marriage to Nick may be the only option.
But can she overcome his cruel words from their childhood when he taunted her about the strawberry birthmark on her face which blights her appearance?
After such a rocky start, can the Spirit of Christmas find its way into the lives of Nick, Gabriella and their families or will injury and grievances from the past keep them apart forever? Content Warning: This book is not a sweet romance. It contains sex scenes. If such content is not to your taste or offends you, please do not upset yourself by purchasing this book. Thank you.