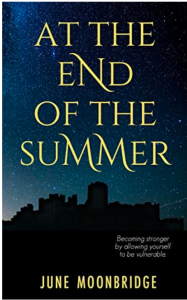 Joshua’s life as a rock guitarist seems like a dream come true. Sold out concerts, red carpet events and wild nights portray him as a confident young man with the world at his feet. Only few friends know the scars he carries.

When freelance photographer Caroline meets the rock band Burning Ruins at the after party, an irresistible chemistry of attraction between her and the sexy rock guitarist is clearly seen to everybody. However, after a forced conversation from Joshua’s side, Caroline’s convinced the attraction is not mutual.

Waking up the next morning, Caroline has no idea what happened. She flees out of the hotel room mortified, convinced she’d become another of the band’s trophies. Determined never to meet anyone from Burning Ruins ever again, she has no clue people around her have different ideas.

In a summer that takes them from London to Wales and to the sultry heat of Rome, they’re desperately fighting their demons from the past, while trying to protect their broken hearts. Will they ever let each other mend their broken hearts or will they try to heal them alone?

I was given this as an ARC to read and review ahead of its publication. (Advanced Reader Copy) It sounded just the sort of story I would like – and it was . There is something alluring about rock stars, especially when they fall in love – just the getting there is exciting and to be caught up in the music and concerts is a great way to pass a few hours of reading bliss.

It was the story of two friends Julia and Caroline and they both live with Caroline’s Auntie Nan, who brought her up after her dad remarried. Caroline is very bitter about her father and his new family and how he betrayed her mother. But of course, things are not always as they seem.

Julia, has two childhood friends who went on to form a band, and they are the rock group the book is based around.

Joshua is very handsome and it is easy to see why Caroline falls in love with him. As with all good romances, theirs doesn’t run smoothly.

The story treats us to a bit of globe trotting from romantic Italy to beautiful Wales as the story twists and turns with a lot of great characters. Photography was what Caroline was really good at, which of course, means she can take photos of the band and it brings her into contact with Joshua.

If you are looking for one of those stories to lose yourself in, with lots of fully formed characters, exotic places, music, and love, then At the End of the Summer is perfect.

The is a great finale to this book – look out for the concert scene when Joshua sings to Caroline.

The only thing I struggled with was that instead of having one, or perhaps two character viewpoints, the reader is in everybody’s head. This was sometimes a bit confusing as the viewpoint sometimes changed line by line.

But all in all this will be a great summer read for you to enjoy now – so don’t wait until the end of the summer!

I also reviewed June Moonbridges wonderful Caught Between Two Worlds – take a look what I had to say.