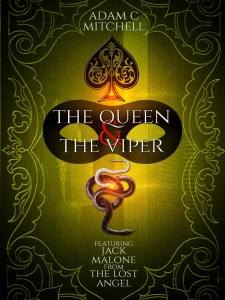 Policewoman Peggy Ellen has secret – by night, she’s a caped vigilante, known as The Queen of Spades. Her city is crippled with crime, thanks to the notorious gang the House of Games.
When police Lieutenant Jack Malone and Peggy’s lover gets too close to uncovering the truth behind this band of criminals, it’s up to The Queen of Spades to rescue him.
Can she save him in time, or will her rescue plans fold like a house of cards?

Peggy didn’t move for a while, her agile brain was going over every detail she and Jack had gained together about the House along with everything she knew on the Contentment Killings, as they now seemed to be linked somehow. Her perfect face was now grim, as she moved seductively and sensuously over the deep-piled rug. Procured one of the fancy cigarette’s Jack had managed to smuggle to her from the police evidence lock-up and lighted it Filling her lungs with a fragrant smoke rumoured to be the personal favourite of a certain British Monarch, she didn’t care about that though, she just enjoyed the perfumed elegance of European living. She began to pace back and forth with almost cat like grace. Her mind racing, her brilliant mind sorting and filing the information she had to hand, in the hopes of finding a tangible connection to both solve the case and protect her man!

Jack’s lover was no simple dame. She was the furthest from what the normal socialite circles would call normal. As in the circles that mattered to Peggy through her city and the East Coast, she was known by another name ‘The Queen Of Spades’ and this queen was nearing thirty four. Which meant she was just to be majestic, with a perfect figure that would set men’s hearts ablaze as well as make and break a few hearts along the way. Her long golden hair and perfect face often crowned the socialite sections of all the major tabloids and broadsheets straight across the country. Yet know one was ever connected perfect little Peggy Ellen with The Queen Of Spades.”

A reading from the book

You can link up with Adam on any of the following:

City Central Tales, one of Adam’s other’s book was reviewed right here on Karen’s Book Buzz Blog and you can read it here.