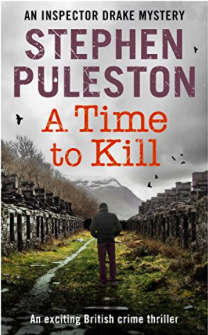 Investigating the disappearance of local antiques dealer, Harry Jones, is not high on DI Ian Drake’s priority list. He has more important things to spend his time on than looking for a man who has probably just walked out on his wife. Until they find Harry’s dead body…

Drake knows they are dealing with a cold-bloodied killer. But the valleys of Snowdonia are an unlikely place for a murderer to hide out, and Harry an unlikely victim. As the investigation unfolds, Drake discovers a web of intrigue surrounding Harry, and business links with the criminal underworld.

A killer hidden in plain sight.

When another murder takes place that strikes at the heart of the community Drake is convinced the killer lies closer to home. And when two key witnesses disappear, Drake faces a race against time to bring the killer to justice, before he strikes again…

This is book 5 of a series. I haven’t read them all but have read Dead on Your Feet and Devil’s Kitchen and throughly enjoyed them, You can read my reviews by following the links.

This book didn’t disappoint and I enjoyed getting to know Inspector Ian Drake again. I particularly like that he has at last found a girlfriend. He is too nice a character to always have to put up with with his ex-wife. Although it was tricky trying to keep his dates and investigate a murder. He managed both, got his girl and got the killer in the end too.

The crime was the killing of an antique dealer and was centred around the Llanberis area of North Wales.

I must admit to struggling  with some of the character’s names. Heulwen Beard was one and in my head I was pronouncing is at Hoolwen. I hope that was right. The one I struggled with the most was Sioned. i couldn’t guess at that one. Was it Son-ed or Shaun -ed. Whenever I came to it, I stumbled and it stopped the flow of the story for me. But it is a Welsh tale and so it should use Welsh names. I recently read and Eygypian story, and that was worse. I couldn’t pronounce the main characters names at all and could only make them us as I went along. But what do you do? I’m not sure, perhaps a summary at the beginning?

However, Drake and his team did a good job in solving a crime, while we as readers enjoyed the countryside and the area as well as a good story.

2 thoughts on “A Time to Kill by Stephen Puleston”