Magic of Stories loves hearing tales from readers and this one came in from Gwyn Broadmeadow. She read my Lost and Found story on here and had one of her own.

“In 1933, my mother Mrs Lilian Probert, lost her wedding ring. Although an extensive search was made, we failed to find it. It was thought it had gone down the drain along with the washing water from the ‘Dolly Tub’.

My father promised mother he would buy her a new one for their silver wedding anniversary on November 5th 1946. Sadly father died in the April of that year.

Mother and I found life hard, because the Widow and Orphans pension in those days was ten shillings and five shillings respectively, per week. That’s the equivalent of 50p and 25p in today’s money. 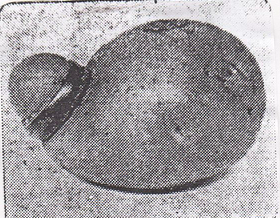 We planted the garden to provide us with vegetables for the coming winter. In the October when mother and I returned from a walk, we were pleased to see that a kind neighbour had brought up our potatoes and left them on the surface to dry. As it was evening and the dew was falling, we gathered them up immediately.

Much to our shock and delight I picked up the potato and it had her ring on it! So mother had her ring for a month before her silver wedding date. She became a widow in her 48th year and remained so until her death aged 93.