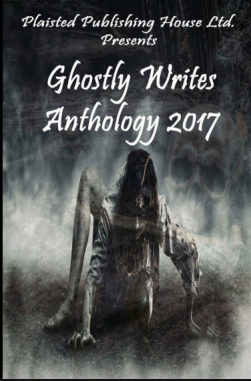 They Came For Him is my contribution to this year’s anthology.  A chilling tale about what happens if you play with Oujji boards. Watch the video below and you can then preorder the eBook, which is released on 31st October and download it for FREE!

We were excited and expectant, although, deep down, I knew this would end badly.

Brian grinned and his gaze swept around us in turn. “Is anybody there?” Everything was quiet. He asked again if anyone was there and we all looked around. Nothing happened.

The only sound was a distant television and the candles flickered slightly. Then, with our fingers still on the planchette, we looked at each other as the television became louder. The draft turned into a breeze. The hairs on my neck stood up.

“Are you there?” Brian asked once more and the planchette shot across the board.

With his eyes wide and in a voice that trembled slightly, Brian spoke again. “Are you a good spirit?” It didn’t move. “Or a bad one?” It still didn’t move. Like the shocked others, I was frozen in my chair.

I wished he hadn’t asked that. The voices I thought were from a television suddenly filled the room. I was holding my breath and couldn’t look at the others.

Shadows were now moving behind Brian. It was very still, aware of something he couldn’t see. His eyes were fixed on me. In a haze of noise and movement, the others were staring at me, too. Their faces were contorted.

“You were told. You were warned,” they all said in unison.

Brian’s face morphed back to his normal self as he asked, “Are you all right, Laura?” I glanced at the others and they too were their normal selves again.

Suddenly, and before I could react, dad’s voice hissed in my ear as if he was standing behind me, “Get out of here! Now!” My head flew around. There was no one there.

I didn’t need telling twice. Terror catapulted me forward and I shot out the door, down the stairs, and into the night.

Dad had been dead eight years, but when I got outside, he was there waiting for me.