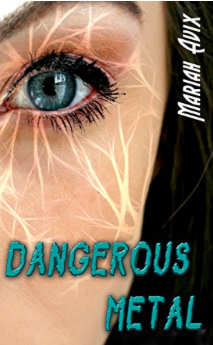 It’s about Eva whose injured body parts are replaced by metal technology. We’re told of a trauma she goes through and we learn that her boyfriend did it to her. Her parents invite her and her ex-boyfriend to dinner not knowing that their relationship ended badly. He, it seems, is after her technology and eventually breaks into her house to get it. Luckily a stranger also breaks in, but he is on Eva’s side.

No, not that I am aware of, but it could very well be in the future.

How easy is it to read?

This was an audio book and so whether it is different in print to interpret, I’m not sure. I found it easy to listen to regarding the technology. The author was able to describe it in a way that can easily be understood by the layperson.

This isn’t my usual read and in return for it appearing on my Book Blast when the audio version was released, the author gave me a copy. I made no promises to listen to it as I don’t really read science fiction. However, I did decide to give it a go and was pleasantly surprise. Apart from the technology and implants, the main character has, it was a thriller, too. I really enjoyed it and loved the fact that she had a third hand and a data screen which allowed her to pull up things in her brain. Pull up as in access to data from various places, a bit like Google but obviously more technical. It was very cleverly written and I hadn’t realised, but thought it was cool that the author actually narrates her own book.

What I liked Best

She could actually arm her fingers, the implants were tasers in her fingertips. Although they could be used as a weapon, they could also be used for massage. I also liked the way she could disappear or go offline and she did things in her head with her third arm. It was really clever.

Eva, the main character did not tell her parents why she split up with her ex-boyfriend, Ernie. The fact that she was in hospital suffering a serious injury seemed lost on them. Why she didn’t tell them he was her ex, I’m not really sure. But if she had, we would have missed that great awkward dinner scene. They thought they were doing the right thing inviting him round and poor Eva was mortified. However, although they knew they had broken up, clever Ernie kept in with them, checking up to see how they were every now and again. What he really wanted was her knowledge and technology, one that could take the world by storm.

I loved the idea of this whole book and hope we see more of Eva in the future.