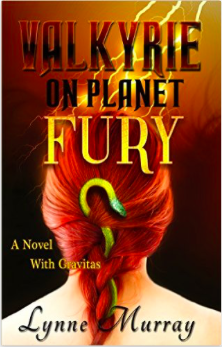 It is a science fiction story about Sybil whose mission is to find children who can communicate with each other and be of use to the Godmothers on the Planet Fury.

Yes, there are two books, the first one is called Gravitas: Valkyrie in the Forbidden Zone.

How many books in the series?

How easy was the book to read?

I found it a hard read because I couldn’t easily pronounce some of places and names that the author had created. Also, Science Fiction is generally not my preferred genre.

Lynne Murray was looking for people to review this book just before it was released and she asked me if I would consider reading it. Science Fiction is out of my comfort zone and not normally the type of book I would go for. But I said I would.

I hadn’t read the first book in the series and there was plenty of references to it, making me wish I had. It didn’t really spoil the story and it could be read as a standalone, although given the choice, I would always read book 1 first.

Murray created not only a new world, but new planets, which are described in detail. A detail that gave me a thorough picture of what she had painted with her words. I could envisage it perfectly and on many occasions, I felt I was there, too.

I particularly like the ‘sirens’ and the birds that lived in their hair. There was also The Furies, a fearsome race who had something entirely different in theirs! Think of Medusa, in fact Medusa is in the story, and I loved that there was a little surprise for the reader there, too.

The most interesting thing was the complete role reversal. The women were the more dominant characters and they are the ones that look after their men. Men being the operative word as they could have as many husbands as they wished, and some had as many as ten. They were the keeper of the houses and ran the homes and estates.

Told in the first person by Sybil, her view of her world as the ‘bread winner‘ was fascinating. She visits the planet of the Furies and meets the Godmothers, who are similar to Queens who sit on thrones. Her mission was to find children who could communicate between the planets. And like any mission it is fraught with danger and things go wrong.

What I liked best:

The strong female character, the descriptions and the role reversal with the men. The best thing was that I adored the book cover. It is so vibrant and eye catching and I believe it was created by Julie Nichols.

I find any book difficult to read when the author makes up names as its hard to know how to pronounce them. I don’t like skipping over them as it defeats the object of reading it. I found it quite a hard read at times ab the but on whole I was glad that I did as  Lynne Murray is a skilled writer. It’s  always good to stretch oneself and read something a different occasionally.