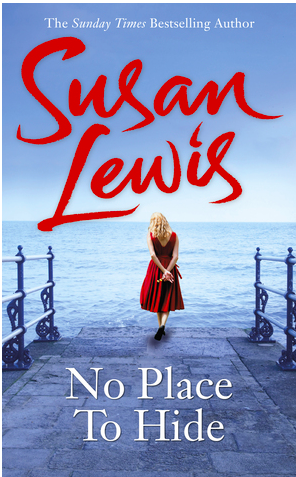 It’s about a secret that Justine is running away from. But as with all secrets they have a way of coming out.

No, this is a standalone book.

Are there further books available?

How easy was the book to read?

I saw a competition on Facebook to win a book, and loving books as I do, I entered. It was something like, Why Do You Think You Should Win This Book?  I simply put that I had never heard of Susan Lewis, so I’d never read any of her books.

I was thrilled when a hardback book arrived directly from the publishers. The cover attracted me right away, although I noticed that on Amazon UK it has a different one, nice, but not as lovely as this one.

What an incredible story No Hiding Place turned out to be. Susan Lewis is definitely a great story teller. I was immediately introduced to Justine who was settling into her new life. She had to leave the UK and settle in America where she was original from. She was with her very young daughter and was separated from her husband who stayed in the UK to start a his new life. Witness Protection was mentioned by one of the characters, and that had crossed my mind, too.

There was twist after twist and lots of suspense coming from different angles. If like me, you have never come across Susan Lewis, you won’t be disappointed to add her to your list of great authors. She knows how to weave an intriguing story that will keep you glued to the pages throughout.

What I liked best:

This was one of those stories that you could literally lose yourself in the page. You would look up and realise you’re in your lounge, and not at some lakeside in America! Her descriptions and intrigues were gripping.

In the first few chapters it was evident that there was something going on. Why was she there? Why was she separated from her husband who she still clearly loved? What happened to all her friends and why weren’t they speaking to her? There were no clues in the opening chapters and I felt there should have been. If the writing hadn’t been so good, I might have given up frustration. So glad I didn’t though!